[Above: First Wave duelists assembled and primered. Click on an image to get a larger view plus controls for stepping through the album one image at a time.]

White Knight recently posted previews of his forthcoming dwarf knights. They are definitely worth a look. Check the link to the left.

And now, back to the Musketeers...

I wasn't happy with my efforts at photographing bare-metal figures, so I decided to primer a batch of assembled figures to enhhance the detail. I'm still getting the hang of this photography thing, but I'm pleased with these results. Eight of these figures are assembled from the first four Musketeer bodies and the eight separate heads. Note that the heads can be mounted looking to the left, right, or straight ahead. It is sort of a ball-and-joint fit, so there is movement up and down as well. In some positions, the neck pin is slightly exposed, but it still looks natural so I don't think it will be a problem.

Eight of the figures are the just-arrived First Wave duelist conversions. These figures have integral heads with long hair and beards. I'm especially fond of the following three fellows who, as gentledwarves of taste and refinement, choose to wear fashionable wigs showing off the latest in 17th Century hair treatments: 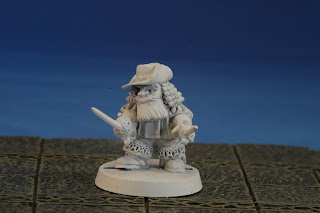 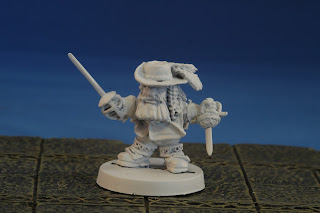 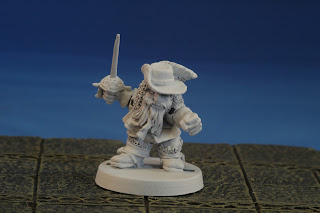 And two from the back... 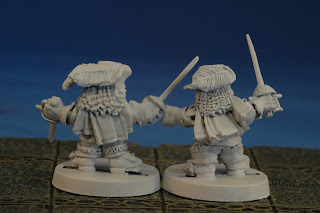 While assembling the figures, I was impressed at how well the separate-hand system worked. While 32 head-and-body combinations (not counting the conversions) ensure variety, the hands, especially the empty hands, are remarkably effective for expressing the dwarf Musketeer's style and attitude. Here are some examples: 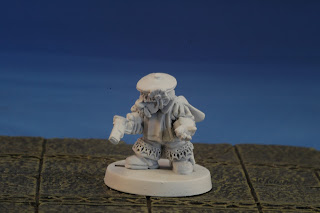 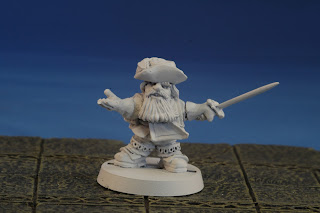 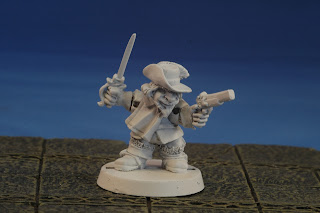 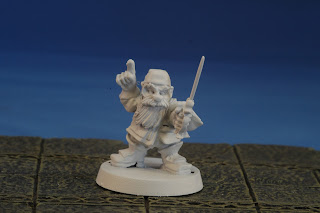 A few simple gestures can make all the difference...

Most of the daggers shown here are rapiers that have been cut down and sanded. It was easier and, frankly, less expensive to have the sculptor concentrate on rapiers for the First Wave, the assumption being that any rapier could be converted to a dagger as desired. The primer makes it easier to see the different styles of hilts and guards on the rapiers. These include cup guards, mortuary guards, swept hilts, and sail guards. Coupled with the different angles at which the weapons are held, the rotation of the gauntlet on the forearm adds greatly to the number of possible poses you can get.

For the First Wave, there will be two sets of rapiers, each with four left and four right hands and a mix of hilts and guards. Other hand sets willl include eight pistols, eight empty hands, four main gauche daggers, and eight swords and daggers in the style of the cinquedea, a 15th Century broad-bladed dueling sword for those who want a more traditional dwarfy looking weapon.


[Above: greens for the First Wave duelists.]

The heart of the forthcoming range is the dwarf Musketeer duelist. For the First Wave there are four bodies. The poses owe a lot to the Richard Lester musketeer films from 1973-74, the most enjoyable and credible of the many film adaptations of The Three Musketeers. I am no expert on dueling or fencing, but the fight scenes in the film seem to me to embody the English style, which was more a codified street-brawl technique than any formal style of fencing. In this style, the earlier sword-and-buckler techniques gave way to the rapier and dagger or, in some cases, the rapier and gauntlet.

I wanted a variety of heads to go with the bodies -- eight heads altogether. The archetypal plumed cavalier hat was the most important type, with room for distinct variations in the way the brims were turned up. I also added a plain hat, a Scottish-style bonnet, a head wrap, and a flat cap. I left it to poshgoblin to work his magic on the faces. You can see the results in the shots of the greens above.

I also wanted variety in the weapons. Rapiers come with bell-cup guard, mortuary guard, swept hilt, and sail guard. In addition, the blades are held at different angles and in different hand positions. The blades are to scale and, if you look closelly, are actually three-sided, with a flat top angling down to the cutting edge. Below left is a rapier with bell guard held at a 90-degree angle. In the center is a rapier with a mortuary guard held at a 45-degree angle. On the right, a rapier with a swept hilt held in a thrusting position. 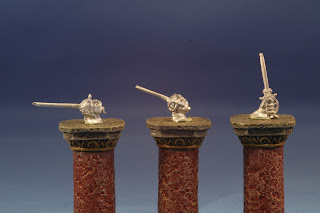 To save money, I commissioned swords primarily, on the assumption that any rapier is easily converted to a dagger. Of course, there were some daggers that needed unique treatments. Below (left to right) is a trident dagger (sword breaker) held at 90 degrees, a dagger with sail guard held at 45 degrees, and a dagger with simple grip and quillon held for stabbing. 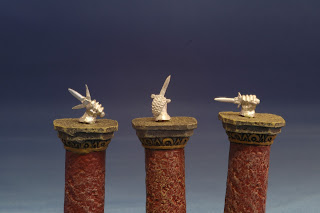 Since the English style sometimes called for one hand held ready to grapple with an opponent, there was an obvious need for left and right hands held open for grappling. It was a natural progression to include left- and right-hand fists and, for those who want to express real attitude, hands pointing with index finger. (Figures assembled with the empty-hand options would make for a great tavern brawl scenario.) 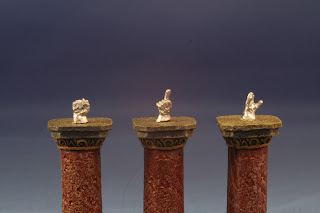 And, of course, left- and right-hand pistols... 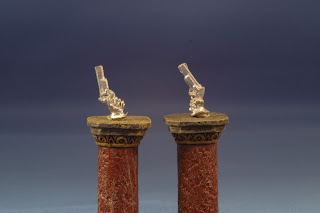 Eventually, I hope to have all possible combinations of left and right hands with swept hilt, mortuary guard, cup guard, and sail guard rapiers (and, by conversion, daggers) held at 90 degrees, 45 degrees, and 0 degrees (thrusting).

I hope I will be able to commission some additional "specialty" hands in the future: hands holding objects such as hats, bottles, goblets, tankards, and the like. I also have ideas for some more specialty daggers such as sword-breakers, although many of these would be challenging to sculpt and reproduce in scale.
Posted by Iron Mask at 1:08 PM 3 comments:

[Above: some assembled proof-of-concept figures painted by the talented Terry Matheny of Sword and Palette. They are wearing the colors of my Free Cantons dwarf army. The figures are armed with cinquedea swords and daggers. The First Wave production figures will have rapiers and main gauche daggers with a variety of 17th Century-style hilts and guards.]

The proof-of-concept figures consisted of one dwarf with a separate head, sporting a trimmed 17th Century style beard, and the other with an integral head with "traditional" dwarfy hair and beard. I had originally imagined all the bodies would have separate heads, but poshgoblin pointed out that this would not be optimal for heads with long hair and full "dwarfy" beards. Separates heads were a practical option for fairly static core-troop poses. For dynamic dueling poses, however, the hair and beard would have to conform to the pose and flow with the costume of the figure. This pretty much meant one head per body. Swapping heads across different dynamic poses would require a lot of filing and filling unless the hair and beard were relatively short.

My solution was to plan the initial figures with short hair and trimmed beards. Once these were completed, the full hair and beards would he added as conversions of the headless bodies.

Initially, the Musketeer swords and daggers were based on the cinquedea, a 15th Century Italian dueling weapon. This type of blade was not uncommon among the old Citadel dwarves of the 1980s and has a decidedly dwarfy look. I have since moved to more traditional 17th Century rapier and main gauche dagger. The cinquedea will not go away -- they will reappear later in the range.

The complete set of proof-of-concept components looked like this: 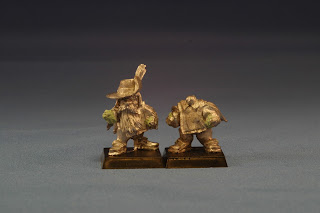 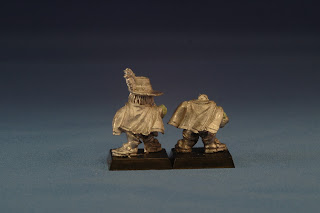 The different types of hands worked well and the variations possible by rotating the gauntlets on the arm was pretty remarkable. 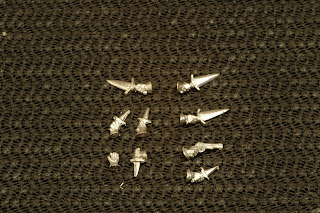 The difference in the sword positions (one thrusting, one holding the weapon at about 45 degrees)may seem too subtle initially. It becomes more obvious once the gauntlets are attached to the arms.

The separate head fit well. While it did not permit a full 180 degrees of rotation, a range of positions was possible. 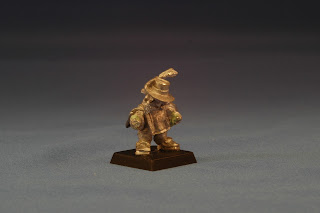 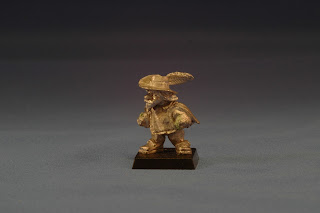 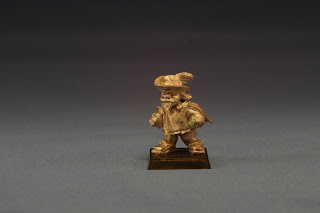 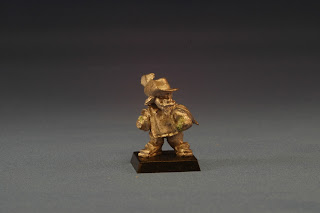 One of the goals was to make the figures compatible with the White Knight Renaissance dwarves. This makes them roughly the same size as the old Marauder and Citadel figures. Below, from left to right:  a White Knight spearman, an old Citadel Imperial dwarf, a Battleforge spearman (with the base ground down to paper thinness), an old Citadel Norse dwarf, an Iron Mask duelist, and a Marauder spearman. 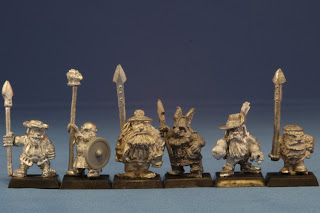 
[Above: greens of the proof-of-concept figures for Iron Mask Miniatures' forthcoming dwarf Musketeers. These test figures are armed with cinquedea swords and daggers. The First Wave figures will be armed with rapiers and main gauche daggers.]


In June of 2011, just as I was settling comfortably into the twilight of my hobby years, I ran across White Knight’s blog. (If you have not seen it, stop reading this and go immediately to White Knight’s Miniature Imperium.) His Renaissance fantasy collection is impressive and the figures he commissions for his collection include the most original and refreshing fantasy dwarves I have seen in years.

White Knight's enterprise inspired me to embark on my own project to commission some Dwarf Musketeers. The popular tradition born in Alexander Dumas’s D’Artagnan novels has been maintained and enhanced in dozens of films and graphic novels. Their archetypal cassock, plumed cavalier hats, dueling gauntlets, flashing rapiers, and broad-topped boots have made the Musketeers synonymous with adventure, intrigue, and swashbuckling derring-do. But the valiant and honored tradition of fantasy dwarves in the service of the King’s Musketeers has been long neglected.
I am now in the unexpected position of producing a range of swashbuckling dwarf duelists modeled after the legendary King’s Musketeers of 17th Century France. Not an easy thing for someone with who cannot sculpt, does not draw, and is only an indifferent figure painter.


My goal is to develop a range of swashbuckling adventurers for RPGs, dungeon crawling, and skirmish war games. I also plan to have core troops that can be used to build units for massed battles. To this end, I am beginning with dwarf Musketeer duelists and enough special characters to complete a Three Musketeers theme. After that, if I can continue the range, I will add core troops, dwarf duelists in civilian dress, and mounted figures for all of the above.


The figures are sculpted by the incredibly talented John Pickford ("poshgoblin"), who did much of White Knight’s privately commissioned range. Those who want to see more of poshgoblin's work should check out the John Pickford Collector's Guide. This site is part of Clam's Clamshells and Seadogs blog. Clam also maintains the Collecting John Pickford Wiki and even has a few privately commissioned figures of his own, a range of  Ewal Dvergar in the tradition of those spiky and rather short Chaos fellows of the 80s.