How to purchase these figures

If you wish to own some of these Dwarf Musketeers, Cardinal's Guard Ogres, or Three Musketeers-themed fantasy personalities, please refer to the following product information.Money from sales goes back into the project to complete the Dwarf Musketeer range.


To place an order, e-mail me at ironmaskminiatures@gmail.com with a list of your wants. I’ll get back to you with the total including postage. After I receive your payment via PayPal, I’ll ship your figures.

The Dwarf Musketeer duelists are available in sets of four figures:

Each Dwarf Musketeer code includes either DH1 or DH2 Rapiers & Daggers shown below. If you prefer, you may substitute any other hand set. The hand sets are also available separately. 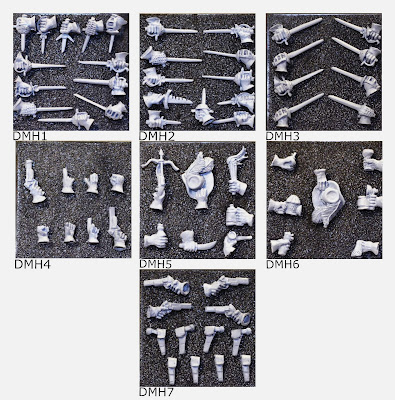 The Mounted Dwarf Musketeers match up very well with the dismounted ones. The product codes will help you determine which mounted figures correspond to which dismounted figures. For example, MDM1A contains the mounted versions of DM1A, MDM2 corresponds to DM2, and so on. Each pack of four Mounted Dwarf Musketeers includes four different ponies. The figures are supplied with DMH3 Heavy Rapiers. Alternatively, you can select DMH7 Pistols and Saddle Holsters. 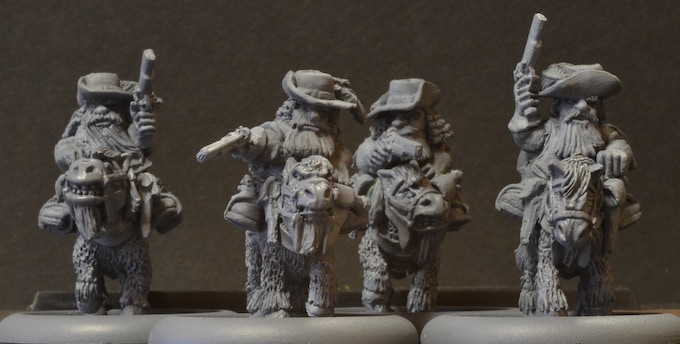 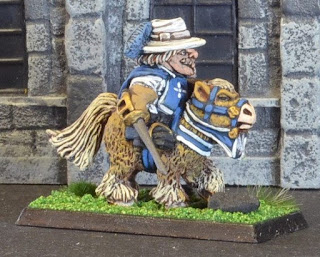 The mounted pickets carry firelock muskets in the right hands. The muskets are included, but you may also select a different hand set. The picket on the right, for example, holds a rapier with mortuary guard from Hand Set 3 Heavy Rapiers.

The mounted escorts ride with both hands on the reins, as they might appear in formal parade or whn escorting Her Majesty's coach.

The Dwarf Musketeer Forlorn Hope is comprised of musketeers armed with firelock muskets and some distinctive command figures. Because unsupported musketeers could be vulnerable to attack from cavalry or heavy infantry, we have included pikemen for pike-and-shotte formations and steadfast halberdiers to reinforce the firing line.


This group of four figures includes three poses, two kneeling and one standing. All of the firing poses have the left hand gripping the musket rest. FH01B (with Assorted Hats) is shown. $16.50

This pack of four figures includes two poses, one kneeling and one standing. The figures are identical to two of the poses from FH01 except for the musket rest, which is angled further forward. This is mainly to add variety and interest to the firing line. Note, however, that the extended musket rest requires a 25mm or larger base. FH02A (with Plumed Cavalier Hats) is showns based on 1” hexes. $16.50


FH03A/B/C Forlorn Hope at the Ready

This set consists of one pose advancing. In addition to separate heads, these figures have separate hands, the left holding a musket rests and the right holding muskets in different positions. The figures can also be modeled with rapiers, pistols, command accessories, and other hands from any of the nine current hand sets. FH06A (with Plumed Cavalier Hats) is shown. $16.50

This is a group of five additional figures to reinforce the Veteran Firelock Company. All are unique except for the halfling drummer (which you can order separately as item SC13 -- see "Special Characters" below). The reinforcements include a bearded officer/ensign, a grisly sergeant, two marksmen in poses only available in this set, and the halfling drummer. 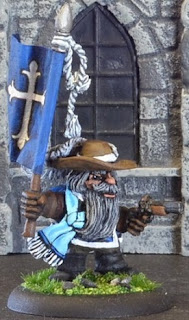 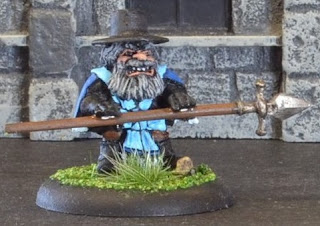 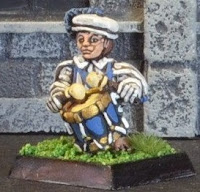 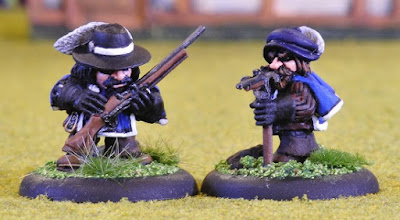 Like the Veteran Firelock Company, the figures in this set all have integral heads. $20.50

Both Veteran Firelock sets (15 figures) can be purchased together for $57.00.

FH12A/B/C Pikemen At the Ready

FH15A/B/C Halberdier At the Ready

This set consists of one pose at the ready (x4). As with the FH12 Pike at the Ready, these figures can be modeled with the head facing forward or turned to the left. FH15B (with Assorted Hats) is shown. $16.50

The Regimental Command pack includes two Officer/Ensign figures, one Sergeant, and a Halberdier. The figures shown use a mix of heads from FH20A, FH20B, and FH20C.
$16.50

For additional command figures, look in the Special Characters section below for the Senior Officer (SC12) and the Halfling Drummer (SC13).

The Cardinal's Guard Ogres are also available individually, as follows.The are supplied with extra hands. 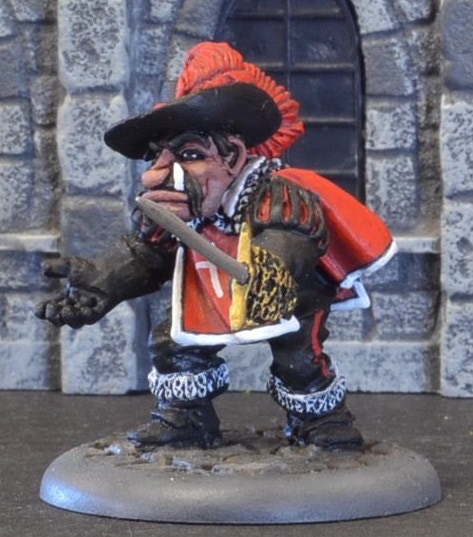 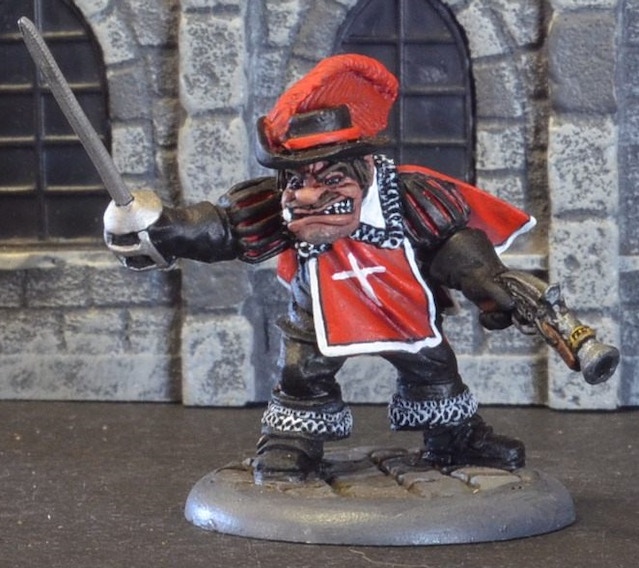 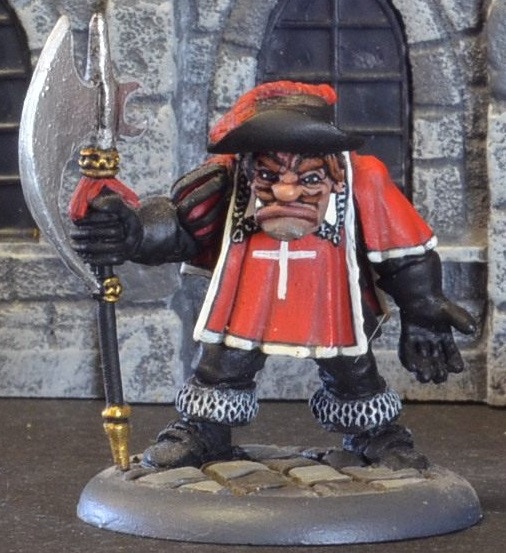 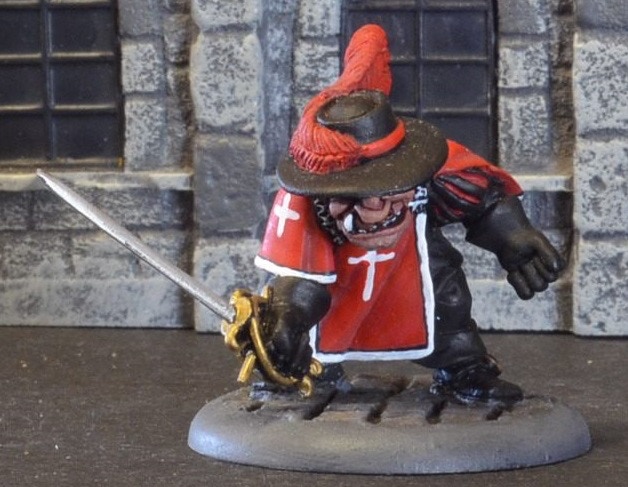 Currently, there are eleven personalities to complete the Three Musketeers theme: 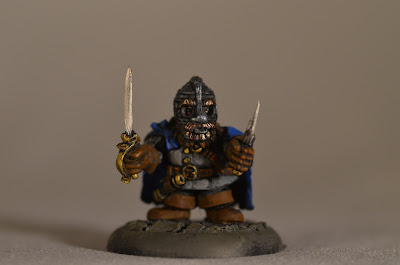 SC1 The Dwarf in the Iron Mask. $7.25
He is the King's long-lost identical twin, condemned to life imprisonment because of the threat he poses to the throne. His mask is inspired by the Sutton-Hoo face mask. This is a limited-edition figure: 81 remaining of the original 200 castings.
SC2 The Dwarf Cardinal. $5.00
SC2M Mounted Dwarf Cardinal. $8.25
The Cardinal 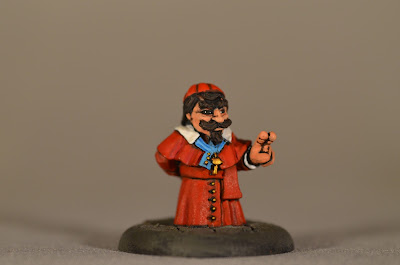 is the true power behind the throne. He will do anything in the cause of preserving the kingdom. While he gives a benediction with his left hand, he is crossing his fingers behind his back. 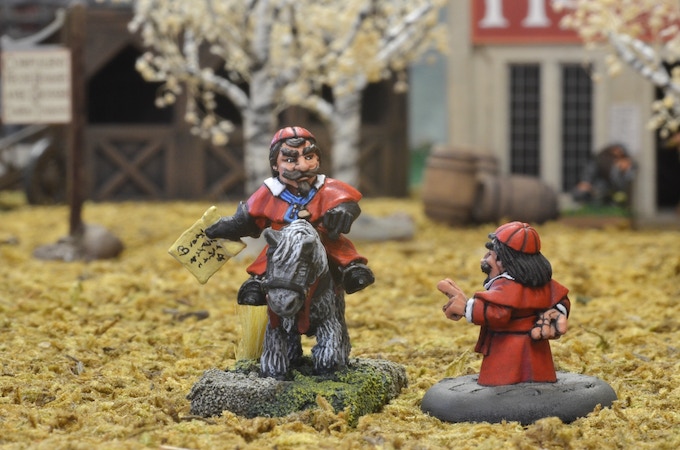 The mounted version of the Dwarf Cardinal represents him as he might appear when commanding his Guard in the field. He comes with an official warrant or a randomly selected weapon in his right hand.

The mounted and dismounted versions of the Dwarf Cardinal can be purchased together for $12.00. 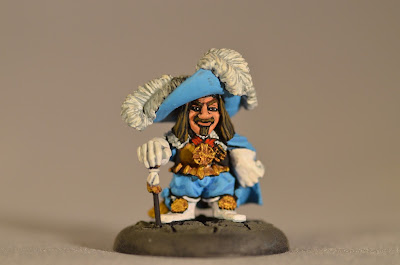 Dressed in impeccable 17th Century style, the Dwarf King is so involved with the social affairs at court that he neglects the Queen and leaves the management of the kingdom to the Cardinal. 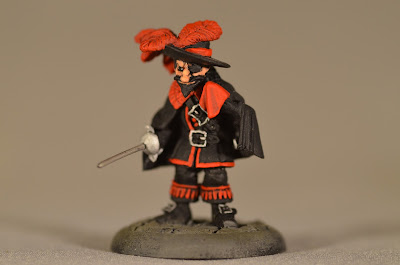 SC4 M Roquefort. $5.00
He is human (mostly), but vaguely rat-like. He is a deadly swordsman and the Cardinal's most ruthless henchman. It is rumored that he has a legion of conspicuously rat-like minions at his beck and call. 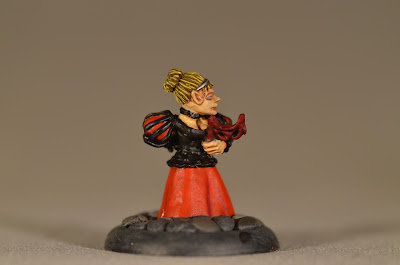 
Milady is half-dwarf, half-elf, (an acquired taste). She is the Cardinal's most deadly agent but, unlike the Cardinal, is determined to foster chaos and disorder throughout the realm. 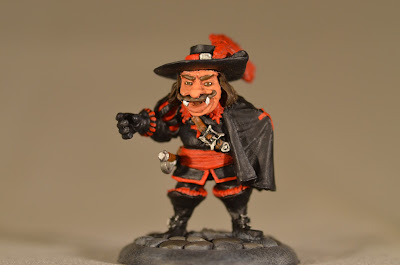 Also known as Dart Onion (of course), he is unique among halflings in his aspiration to become one of the King's Musketeers. He has adopted the cavalier hat and broad-topped boots (largish, to fit his largish feet) of his heroes and is lethal with epee and dagger. 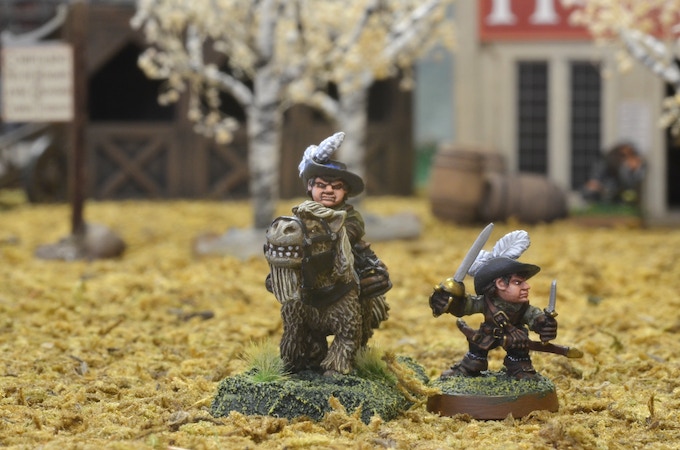 The mounted and dismounted versions of Dart can be purchased together for $12.00.

SC8 Planchet. $5.00
Planchet is Dart's lackey (and also a halfling). He is familiar with every bakery, tavern, hotel, distillery, inn, winery, butcher shop, ale house, and street vendor in the kingdom. 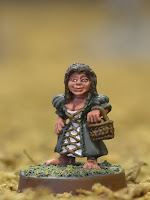 SC9 Constance. $5.00
Constance is Dart Onion's lover and, as the Queen's seamstress, a critical channel of communication between the Musketeers and their beloved Queen. She is often at the center of the Queen's intrigues. 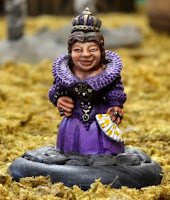 SC10 The Dwarf Queen. $5.00
The Queen, though neglected by her husband and spurned by many in the court, has found ways to occupy her time and further her interests. Frequently, he wishes are in direct conflict with those of the Cardinal, whom she considers here deadliest enemy. She is well known for presenting herself in regal splendor. 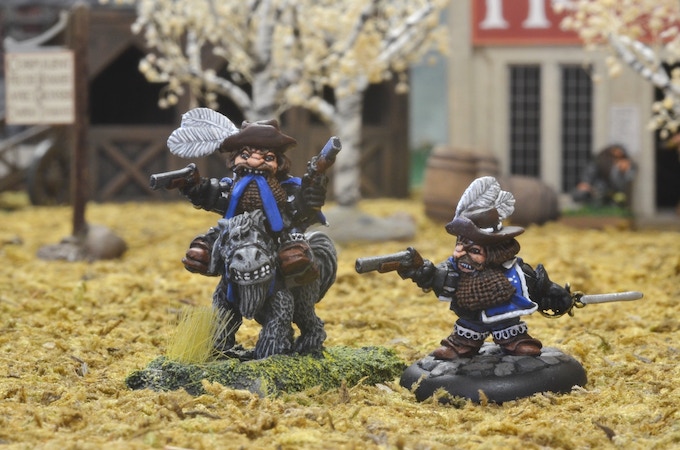 Basile le Fou earned his nickname because of his penchant for charging his enemies with his reins in his teeth and both pistols blazing. He comes both mounted with separate pistols (and a pony, of course) and dismounted as a single-piece casting with rapier and pistol.

The Senior Officer is supplied with a right-hand spontoon and an empty left hand (either pointing, open, or making a fist -- randomly selected) as seen on the figure on the left, above. The other figures use hands from the various hand sets.

The Halfling Drummer is a single-piece casting.