The second Kickstarter was successful...

Thanks to everyone who supported the project.

Production is now underway. The first step is making the production molds. After that, little Dwarf Musketeer horsey guys and ponies will start appearing mysteriously and (literally) by the pound, which means that before too long I'll be spending several hours a day doing nothing but sorting bits.

After I fulfill all the premiums for the Kickstarter backers, I'll update the price list on this blog and make all the figures available for purchase.

In the meantime, the next phase of the Dwarf Musketeer project is underway. It will feature the Forlorn Hope, Musketeers armed with firelocks in various battle poses. This phase will be directed more toward wargames than RPGs with enough poses, including command figures, to field a unit with lots of variety and animation. Having said that, any dungeon crawlers out there might be well served to have a little firepower to support their adventurers.

Here are some previews of what's coming. These are concept drawings Colin Upton did for me last year, so be advised that there may be slight changes as the sculpting progresses.

In conceiving this phase of the project, I obviously wanted each figure to have his own distinct character. Collectively, however, I wanted the group of figures to suggest something of the frenetic chaos of a unit in combat. This first sketch of the Forlorn Hope in action should give you some idea of the effect I'm after: 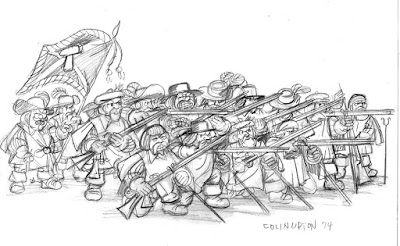 To accomplish this, I need a wide range of poses reflecting figures advancing, preparing to fire, firing, and loading: 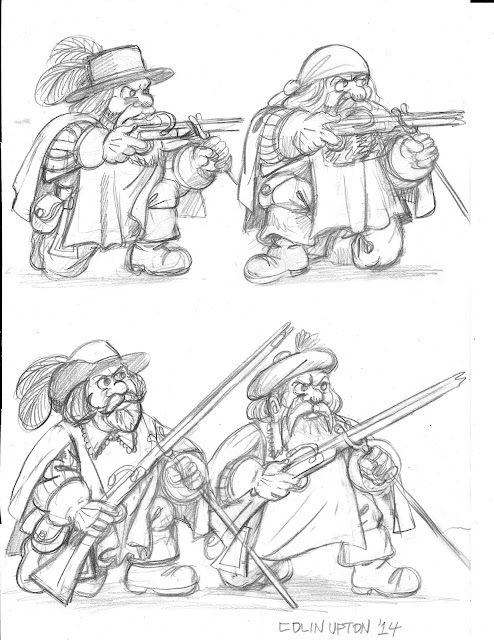 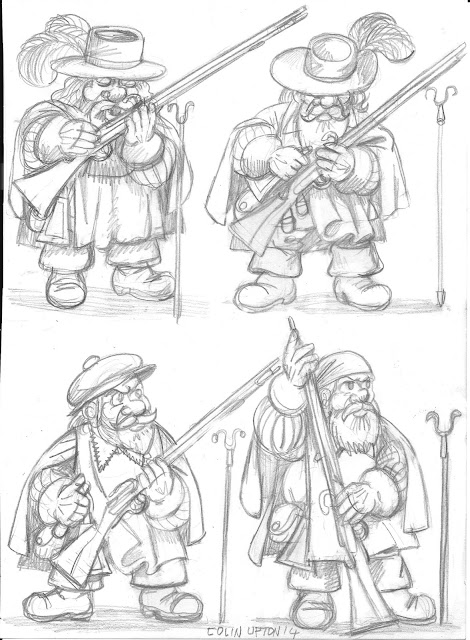 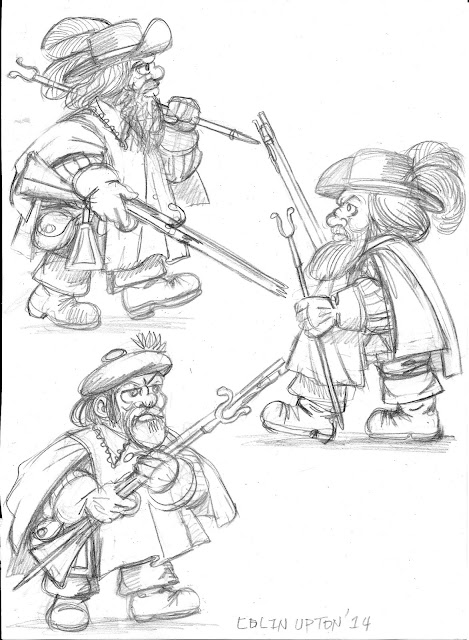 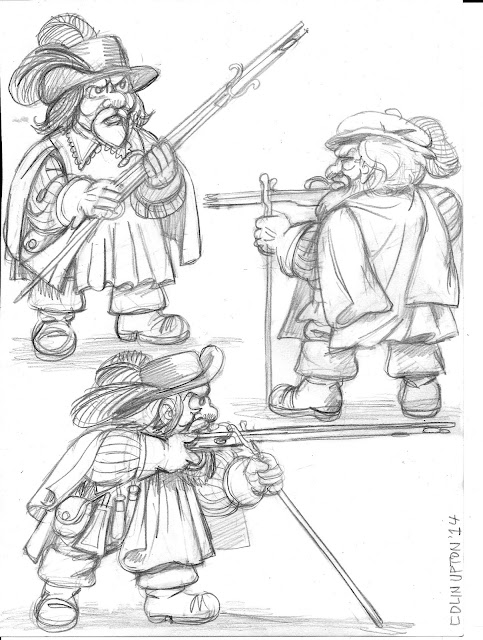 Most of these figures will be supplied with separate heads. Initially, these will be same heads already available for the Dwarf Musketeer duelists and Mounted Dwarf Musketeers. They will also have separate left hands with musket rests.

The musket rests are a key part of the look and feel of the period. If everything goes according to plan, there will be some degree of articulation in the fit of the gauntlet to the wrist that will let you vary the position of the rest on the musket. Also, the rest will be cast long so you can trim it to fit a particular pose or basing preference.

With the previous releases, the separate-head versions were followed by variants with integral heads and long hair and beards -- the much-loved traditional "dwarfy" look. For the Forlorn Hope, the current plan is for the long-hair-and-beard variants to have blunderbusses, hence no need for a musket rest nor for a separate left hand. I'm inclined to think of the two types as Young Musketeers (separate heads, firelocks) and Veterans (integral heads, blunderbusses).

Next time, I'll show some concept art of the core troops (with musket, standing and marching) and the command figures, which will include a halfling drummer.