I'm in the process now of organizing a second Kickstarter to introduce the Mounted Dwarf Musketeers. I'll launch when I have in hand some precasts of all the figures and bits. I'm also waiting for some painted samples which will have to be photographed so I can pretty up the Kickstarter page. I cannot precisely predict when all the pieces will fall into place, but it should be soon. In the meantime, here is a preview.

It goes without saying that the mounted figures complement the foot figures. To this end, the core figures will use the separate hands and heads already in production -- hands and heads, of course, are compatible across the entire range. The figures will be supplied with the Heavy Rapier hand set In addition, there will be an additional hand set consisting of pistols and saddle holsters.

First of all, the ponies. There are for of them, originally sculpted by John Pickford for White Knight Miniatures. Each pony is a unique character, full of personality. 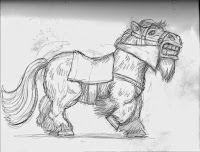 You can see the ponies on White Knight's blog here.

The mounted Dwarf Musketeers make ideal RPG or skirmish figures, but I also wanted them to be suitable as battle cavalry for Oldhammer-style wargames. I'm a wargamer myself and I like units where each figure is unique. The following image captures the effect I was after: 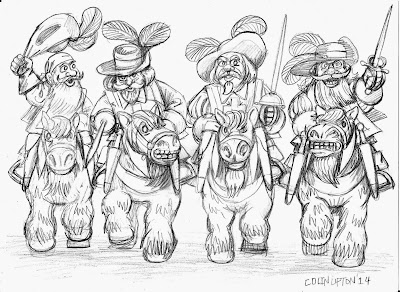 The historical King's Musketeers were an elite combat unit and served with distinction as both infantry and battle cavalry in the King's campaigns. The above figures are charging stirrup-to-stirrup, rapiers forward. (NOTE: While the concept art shows two left-handed riders, the actual figures consist of three right-handed and only one left-handed body.) Rapiers are supplied with the figures, although other hand sets are available. For example, there will be a Pistols and Saddle Holsters hand set which can be used to model the figures as pistoliers. Alternatively, you could use the thrusting rapiers from either of the Rapiers and Daggers hand sets to model the figures according to French cavalry doctrine, with rapiers forward.

The figure waving his hat is modeled using one of the bits from the Special Hands sets. These include left and right hands holding not only plumed hat, but other interesting items such as a tankard, bottle, torch, pipe, hand crossbow and so on.

The Mounted Dwarf Musketeers will be package in three groups of four, each with four different heads for a total of twelve unique head variants. Each pack will include one each of four bodies and one each of four ponies.

As with the Dwarf Musketeers on foot, there are also twelve figures with integral heads sporting long hair and full beards. This is a more traditional look for fantasy dwarves, although some of them have hair and beard styled after 17th Century fashion. (You can see examples of this in earlier blogs.) It was necessary to give these dwarves integral heads in order to capture the proper flow of long hair and beards. These will also be offered in three separate packs of four figures each.

This next figure was intended to be a mounted escort or a trooper on the march or on parade. He will come with separate head and right hand and be available in a dozen long-hair-and-beard versions. 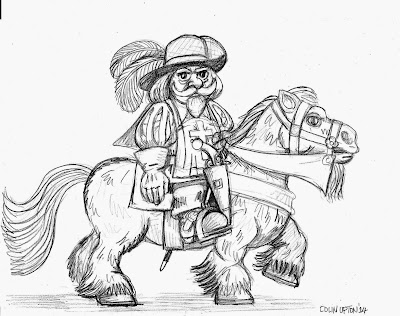 For a number of reasons, the Trooper was put on the shelf to be released with the Forlorn Hope and command figures at a later date. He was replaced, however, by a mounted version of one of the personality figures, the Dwarf Cardinal. The Cardinal will have a similar pose with a separate right hand. He will be supplied with a pony and probably three hand options: a pistol, a sword, and a document with a royal seal.

A second personality figure will be included in the Kickstarter: 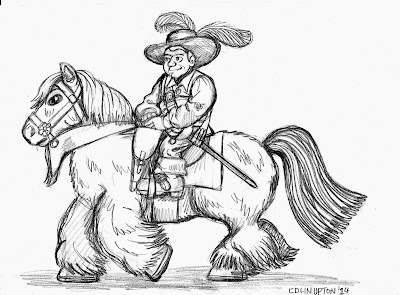 He is, of course, the mounted version of Dartleby Onion, the halfling swashbuckler. He is a single-piece casting and is supplied with a pony.

Finally, there will be a limited-edition figure offered initially to Kickstarter backers. He is Basile le Fou: 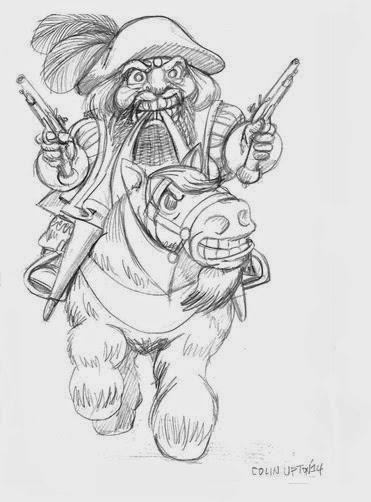 Basile will be limited to 250 copies (or more, but only in the unlikely event that I need more than 250 figures to fulfill the Kickstarter obligations). He will be supplied in both mounted and dismounted versions. The mounted version is holding the reins in his teeth and firing two pistols. He will come with a pony, of course, and left- and right-hand pistol hands and empty saddle holsters. The dismounted version is aiming a pistol with his right arm and holding a rapier in his left.