The third Kickstarter campaign, the Dwarf Musketeers Forlorn Hope, is entering the final phase before launch. The first group of finished sculpts comprise 22 unique poses plus a few bits. Of these, some figures went back to the sculptor for adjustments and conversions. I’ve got some quick cell-phone camera shots below.

This release will offer Dwarf Musketeers armed with (surprise!) actual muskets -- firelocks, really. A musket-armed dwarf is always handy for dungeon-crawling adventures and skirmish games, of course, but I was mindful of fantasy battle games like Oldhammer, Kings of War, and Dragon Rampant when I planned this release.

The historical King’s Musketeers were more than the brawling palace guards and royal partisans depicted in popular culture. They were hardened battle troops and served with distinction in France’s wars, often under the command of Cardinal Richelieu. As mounted troops, they were the army’s pickets, skirmishers, and even battle cavalry. On foot, they were the spear point of the assault, the storming party, or the forlorn hope that plugged the gap in the line, stormed the enemy’s positions, and turned the tide of battle.

The following concept drawing shows the effect I was after: 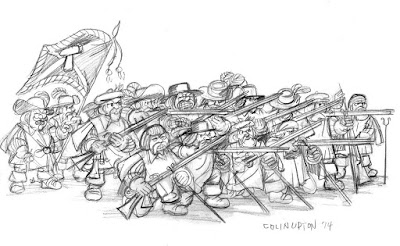 I’ve never been partial to blocks of identical figures on the war-gaming table. For the Dwarf Musketeer Forlorn Hope, I wanted to be able to model a unit with the energy and chaos of a Troiani-style battle scene. This meant variety -- not just in body pose, but also in foot position and such things as the angles at which the muskets and musket rests are held.

I used a mix of horizontal and diagonal 20mm square slotted bases and fastened all the heads and bits temporarily, so you may see drooping bits and creeping blobs of Blu-Tack. Better pictures will follow soon. 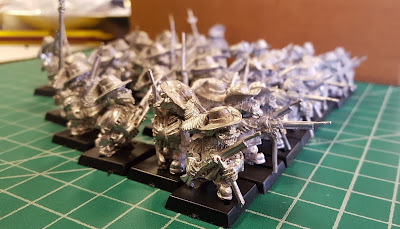 I settled for seven firing poses for the front rank. Two are standing and firing. Five are kneeling, of which three are aiming and firing.

The two figures not shown here are similar to the two figures on the right, but with the musket rest grounded closer to the feet for a better fit on a 20mm base.

The rear rank has four poses, one at the ready and three loading their muskets: two priming the pan and one ramming shot. These figures will be supplied with separate musket rests that can be used to detail the figure base.

And here is a full firing line seen head-on:

And again, with the front rank removed:

To complete the firing line, there will be two Kickstarter exclusives: 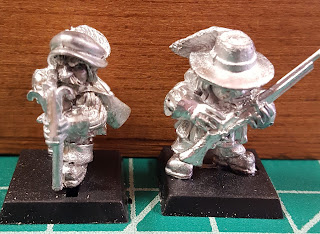 The figure in the flat cap is standing and firing, cheek to musket. The figure in the plain musketeer hat is blowing out the pan of his musket. Both of these poses were impossible to pull off with separate heads, so the heads are integral.

To represent units on the march or moving into position, there are four poses of musketeers advancing.

Each pose carries its musket and musket rest differently, as you would expect in an era of warfare in which troops were more herded than marched along the road or into battle. No parade drill here.

And next is an entire unit advancing:

Nearly all of the figures shown come with separate, poseable heads (compatible across the entire range) that can be turned or tilted to any anatomically reasonable angle.

Finally, a look at the command figures.

The senior officer has separate hands and will be supplied with different hand options including an espontoon. The ensign has separate head and hands, one of which holds the standard. The hands used for command figures will also be packaged separately for use with the other foot and mounted figures in the range. The sergeant (separate head) is holding his espontoon in a horizontal position to better push the troops into something resembling a line. Last and least, the intrepid halfling drummer (beloved by all the company!), a single-piece casting.

That is all for now. There are 18 more figures to come for this release. To give the unit some punch in pike-and-shotte warfare, there will be pike dwarves. There will also be a set of twelve long-haired, long-bearded conversions with integral heads that will comprise the Veteran Firelock Company.

More on these and the new riding poses next time.